Striving for a simple life with lots of travel

In September 2018 we went wedding venue searching in Italy, and Croatia had been on my wishlist for a while. I managed to find amazing flight prices meaning that all in all, the flights from London to Pisa, Rome to Dubrovnik, and Split to London, cost £280 for two people – it was a price I couldn’t refuse!

We spent 3 nights in Dubrovnik and 4 nights in Split. We had intended on taking public transport as we had done with ease in Italy, but we decided that hiring a car would give us more flexibility to do the excursions that we wanted. What came unexpectedly, is that the excursions were more expensive than anticipated. But this meant that hiring car became cost neutral for us.

I have mapped out the rough route of our trip below, stopping at Kravica Waterfall and Mostar on the way to Split. We also visited Plitvička Jezera and Trogir whilst staying in Split.

I think my trip to Dubrovnik can be explained in one sentence = I should’ve watched Game of Thrones before visiting!

Dubrovnik was truly as endearing as every photo of it on the internet. The ancient city is very accustomed to tourists, as you would expect – so you can find everything you need within the city walls. As per visits to most tourist destinations, I would recommend leaving the walls of the city for food if you are tight on budget.

After spending 4 days rushing around Rome, we were desperate to chill-out a little. After our first full-day of exploring Dubrovnik, we were in search of a beach to spend the afternoon & evening. We were intending visit Sveti Jakov beach, when we accidentally took a wrong turn and walked towards an enclosed jetty. I wouldn’t be able to direct you any further than that, but if you manage to make the same wrong turn as us – enjoy it! The sunset is absolutely beautiful from this angle of the shoreline. This is a must do whilst visiting Dubrovnik – but don’t forget your water shoes! the coastline of Croatia is full of nasty sea urchins… 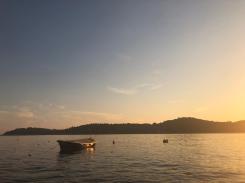 The other sight we wanted to see in Dubrovnik was the one from Srd, to which you can get a cable car but we decided to drive. I wouldn’t recommend this drive in any less than a 4×4. Our poor Toyota Aygo struggled to say the least. We stopped just shy of the top to avoid the worst of the traffic – also other people seeking a good spot for the sunset.

After spending a few days marvelling at the old town walls, listening to my other half hum the GoT theme tune, and admiring the sunsets, we packed up once again to head North to Split.

A 2hour 20minute drive from Dubrovnik bought us to Kravica Waterfall. Prior to visiting, I had been warned about how busy the waterfalls can become; although this wasn’t our experience – so I would definitely recommend visiting in mid-late September to avoid the crowds. As we were also travelling by car, we managed to avoid the excursion coaches by getting to the waterfalls earlier.

We opted to stop en route for food, and managed to pick up a pizza for 4 Euros, which further highlighted to city inflation on food and drink. 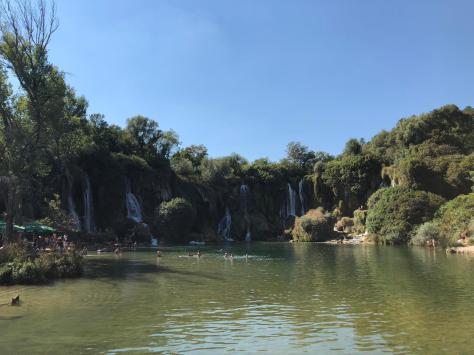 Mostar is an hour further from Kravica Waterfall, and it is an astounding place. Notably, there is the Old Bridge of Mostar which connects the Christian district to the Muslim district of the city. Each side has its own character and culture, and there is a man who does a daily jump from the bridge for money. My mum visited 20 years ago – and he was still pulling the same stunt!

The bridge was destroyed in 1993, and sadly there is still a sense that the history within Mostar haunts it. There was definitely a difference in atmosphere to Croatia, and there were a few begging children which was sad to see.

Euros will be accepted in most tourist places in Bosnia & Herzegovina, but do remember that it isn’t within the EU and so your phone will either stop working or charge you global rates (if you are travelling from within the EU). 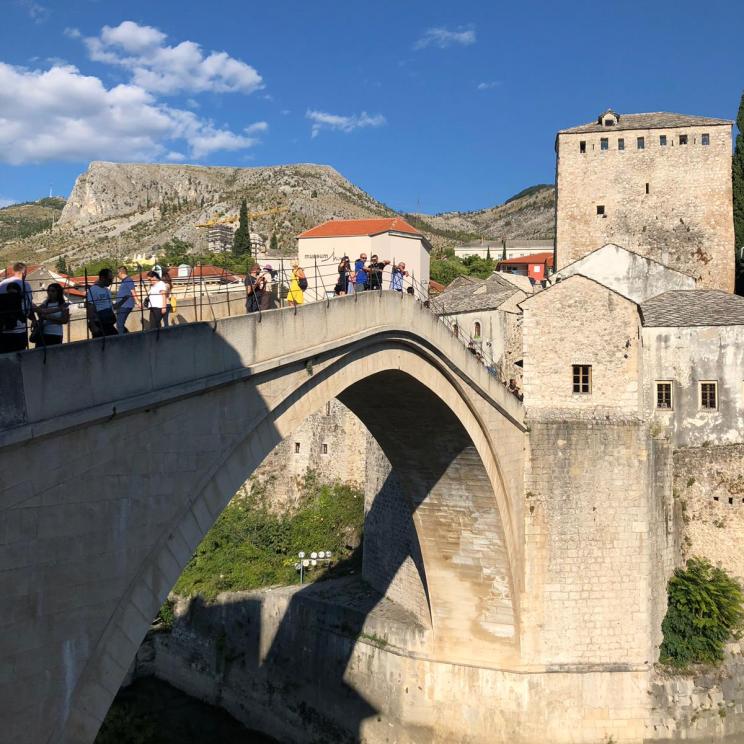 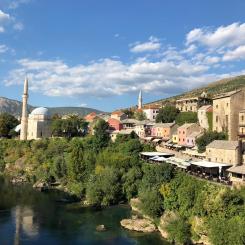 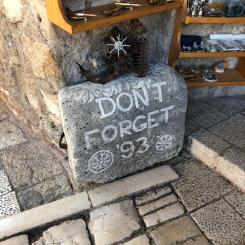 My first impression of Split is that it was much more of a modern city than I expected. To get to the old town, you have to drive through the metropolis of Split; with a lot of towering, shiny shopping centres. And even when in the old town, I found Split to be a lot more commercial than Dubrovnik.

A must do whilst in Split is the Bell Tower of the Cathedral of Saint Domnius. You can gain the best views of the city from this point. 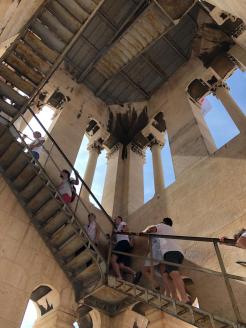 Whilst in Split, we took the opportunity to also visit the Plitvička Jezera, which was a near three hour drive. Although a little busier than Kravica Waterfall, we had a similar experience. Again, it’s best to arrive earlier in the day to avoid the coach trips. I would definitely recommend a visit here – it’s also refreshing to escape the cities for a while! 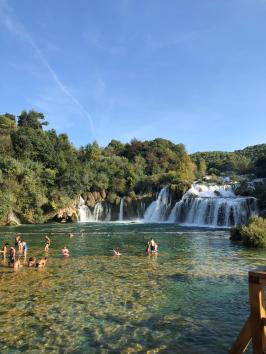 Our last afternoon in Croatia was spent in Trogir – an hour drive from Split. We drove straight through the centre of Trogir, to Copacabana Beach. For the size of the beach and the amenities provided, Copacabana was reasonably quiet on the day we visited. Chris spent a lot of the time here snorkelling, and there was an inflatable assault course on the water that we had to ourselves for 45 minutes! The sunset from the beach could also be viewed from here, and it was the perfect end to a seemingly busy week!

Croatia has been a popular place to visit for a few years now, and it is evident that these cities consider themselves tourist destinations. If I was to visit again, I would spend less time in the cities and more time on the sea. The islands running alongside the country are supposed to be true hidden gems! I will most probably visit Dubrovnik & Trogir again. However – with Split – I felt that we exhausted everything there was to see in the 3 days we spent there.

2 thoughts on “Croatia and Bosnia & Herzegovina in 7 days”

This site uses Akismet to reduce spam. Learn how your comment data is processed.

Lil Warsaw photo dump 🇵🇱
Location at the end! 😍
Repost: hopefully this one doesn’t lose its audio! The Lake District, UK. The ultimate home of the walkies 🥰🐶
It was hot 🥵
Come and take a trip under the waterfall with me 🤩
This summer, travelling Europe with our babies 🥺🥰
Follow Stacey Explores on WordPress.com